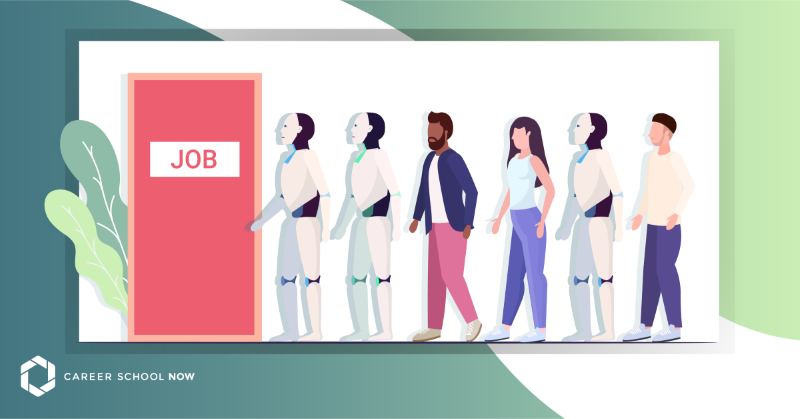 The future is here. We don’t have flying cars or moon colonies, but our lives are being impacted by technology. The pros and cons of automation may be debated, but one possible path to success is to pursue one of the careers at the lowest risk for automation takeover.

In 2013, two Oxford professors published a paper that estimated at least 47% of employment in the United States was at risk of being replaced by automation. A 2017 McKinsey Global Institute study put the risk for automation at almost 50% of US employment. One out of every six Americans believe robots and computers will steal jobs currently done by humans.

These studies may sound bad, but there is good news. A study from the Brookings Institute showed that the jobs most likely to be replaced by automation were the “boring and repetitive” jobs. That means the jobs at lowest risk for automation takeover are exciting and unique.

Tom Pickersgill, the founder and CEO of a staffing firm that uses artificial intelligence to match job seekers with jobs, said one class of jobs at lowest risk for automation were creative jobs. Two creative careers that offer trade school education and training that leads quickly to high paying jobs are cosmetology and the culinary arts.

The beauty industry has a constant demand for qualified, creative, and well-trained graduates. As a cosmetologist, you can specialize in hair styling, makeup, or nails, and your career and workplace can look as varied as the people you work with. The craft of preparing, cooking, and presenting meals is a perfect career for someone who loves to work with food. You can work in the kitchen, open a restaurant, or have your own catering business with a career in the culinary arts.

A PricewaterhouseCooper report specifically looked at the impact of automation on healthcare and found that automation will take over the repetitive tasks such as drawing blood or moving patients around, leaving healthcare professionals more time to tend to the human side of medicine. Some areas caregivers can focus on that require a human touch include:

Similar to healthcare where automation can make the job easier and lead to higher satisfaction for humans, an article in Construction Executive shows that construction workers are also finding their jobs made easier and the strain on their bodies diminished by working alongside automation tools called cobots. Cobots are complex machines designed to work with humans and take on tasks like lifting heavy weights and doing repetitive movements that are hard on human bodies. In addition to being at low risk for automation takeover, construction jobs are on the rise.

Another automation-proof career field according to Pickersgill is helping people heal their mind as social workers and therapists. A career in social work is ideal if you are passionate about helping others better their lives. As a social worker, you will be equipped to provide counseling services to your clients. You will also be able to educate them and connect them to resources they may need. You’ll work with them on their relationships, help enhance their emotional and physical well-being, and train them on ways to reduce stress.

Although many people struggle with mental illness, the illness is not always visible to the naked eye. It is the job of a psychologist or counselor to diagnose the issue and provide the appropriate treatment plan. Psychologists examine human mental processes and how they affect behavior. They use observation, assessment, and experimentation to develop theories about the beliefs and feelings influencing your patient’s actions.

Previous waves of automation have added as many, or more, jobs than they replace and now is the time to get started or advance in a job at lowest risk for automation takeover. The key to making sure you don’t become a victim of automation is to quickly learn new skills and add to old ones.

Most of these careers have nationally accredited educational institutions in your area that offer flexible class schedules, hands-on learning, and career assistance after graduation. The future is now and it’s in your hands. Our career guide can help you move forward with these low automation risk careers and many more.

What's an Information Technology Program Like?
Careers You Can Start With a 2 Year Degree
About Online Career Training and College Programs
Jobs that Pay Over 60K per Year No Degree Required
What is Vocational Rehabilitation?
...Previously Pay for Skilled Trade Careers is Going Up Up Next... Careers in Advertising, Public Relations, and Marketing