Home
/
Career Guide
/
Getting a Raise or Promotion

How to Get a Raise or Promotion 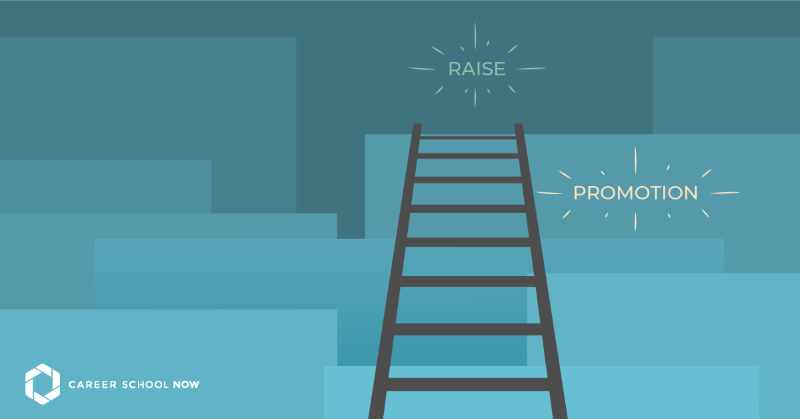 We all want to feel fulfilled, successful, and appreciated in life and at work. One of the most validating ways for this to happen is through a promotion and, subsequently, a raise. However, for many people, it can be awkward to even broach the subject with their bosses. It’s a conversation that comes with far too many uncertainties, which makes it anxiety-inducing because of how many different ways asking for a raise or promotion can backfire. But with some sound advice, you can dramatically increase the odds in your favor.

What Bosses Look at When Considering Promotions

Being considered for a raise or promotion relies on so much more than you simply thinking you deserve one. It’s an opportunity that is earned through hard work. And despite wanting to think there’s a perfect time for you to move in for your ask, there really isn’t. Of course, a few of those proverbial ducks must be lined up in order to give you the best possible shot. Once you’ve decided you’re going to ask your boss for a raise or promotion (or both), here are some things for you to consider. They are definitely going to be bullet points your boss is looking at.

How to Bring it Up

We already know attempting to bring up the conversation of a promotion or raise can be awkward and uncomfortable. A heaping amount of preparation is needed, with a large dollop of confidence and a dusting of determination (that almost sounds like an ice cream sundae). We also know that there’s really no “wrong” time to ask for this kind of discussion, but there is DEFINITELY a right way.

First of all, schedule a meeting with your boss. Unless you’re already completely prepared with all your talking points, make it for a week or two out. That way, you will have enough time to gather up all the information you’ll need to state your case.

You’ll want to come to your meeting with notes of all your accomplishments, responsibilities, and any value props that show who you are as an employee, what you’ve done, and what you’re still capable of doing.

Do some research to help figure out what to ask for in salary. Good rule of thumb is to ask for 10-20 percent more than you’re making now. But expect that if you do get a raise, it will be the lower end of what you asked for.

Keep in mind, most businesses only give raises once a year, the same with bonuses. Unfortunately, raises no longer happen automatically; neither do most promotions. With that being said, pay attention to when raises and promotions generally happen at your company. Is it at the beginning of the year, work anniversaries, the end of the year? We mentioned that there’s no perfect time to ask, but some times are better than others.

The nuances of asking depends on the personality of your boss. Is he or she receptive to when you just speak your mind, or do you have to delicately lead up to the question? Knowing that bit of info will help guide you toward your best approach.

Points to Avoid Talking About at All Cost

There are some things a boss just doesn’t want to hear about, especially if you’re pitching for a raise or promotion. Stick strictly to your words being about you and the company. No matter how your conversation goes, your boss will probably have to have a discussion with his or her boss before making a final decision. To increase your chances, avoid these following points:

What Happens When the Answer is No

Unfortunately, there are no guarantees that you’ll be granted your raise or promotion. Don’t get discouraged if that happens. There may be other perks you could ask for as a replacement.

Talk to your boss about the type of perks that could be made available to you. The reality is, vacations days, remote days—these types of benefits are far easier to give out than the cash.

From Jason Patel, former career ambassador at the George Washington University and the founder of Transizion, a college and career prep company that is focused on closing the Opportunity Divide in America. A part of its mission is to donate a portion of profits to low-income students and veterans who need college prep and career development assistance.

What sorts of benchmarks do you look for?

Be outcome-oriented in relation to healthy company growth, which means look for benchmarks related to client success and happiness. What do our customers say about our team members' processes, content, customer service, and procurement of outcomes?

The reason why outcomes are so important is because they define much of our company success in a concrete and tangible way. We can measure outcomes through reviews, feedback, and where our students get into school and/or intern.

How should you be approached?

Naturally, courtesy and a willingness to talk are appreciated. Moreover, come with specifics of how you supported the team whose work led to positive outcomes. Prepare with the action steps you took to help the company.

What are realistic expectations when it comes to promotions or raises?

Now that I've been on both sides of the equation, keep in mind that company budgets aren't always set in stone. For startups or nascent operations, managers and C-level execs need to be cognizant of oncoming challenges and threats. This is all to say, most of us try to be reasonable. We don't want to make anyone's life harder.

From Wayne Strickland, the former Vice President of Global Distribution Strategy, Hallmark Cards. He is a business consultant, speaker, author, and enlightened leader. His book on the subject of leadership, communication, and decision-making skills, "Get Over Yourself, Decide to Lead: Insights from Hard Lessons Learned," is available through Amazon. Find his LinkedIn page here.

I am going to share a little secret with you on how to get promoted: Peers promote you—your boss fires you. Treat your peers with great respect, because they are the ones that promote you.

I have been part of countless succession planning meetings. I have seen many consultants describe very elaborate processes for talent development. I have had multiple discussions with leaders in other organizations about how they develop and promote talent.

The bottom line is that peer support is the No.1 factor in getting promoted.

Here’s how it happens:

Why Your Peers Are the Ones to Promote You

In the meetings where leadership teams discuss talent development, staffing, and long-range human resource strategy, each leader in the room has a short list of 2-3 people they want to advance. If you have more people than this on your lists, the discussions get watered down. (In fact, 1 or 2 per list is actually the best plan to get someone discussed).

As each leader describes the skills and accomplishments of the person they want promoted and what they think they should do next, the other leaders are recalling what they have heard and observed about this person over the past year from their peers in their organization. They quickly develop an opinion and begin to share what they have heard or seen.

One of two things happens next:

First, the good news: Leaders around the table start giving examples of when the person worked great with their teams. They say things like they were highly responsive, finished work on time or ahead of schedule, that they were great collaborators, took the high road on tough issues, or they were a team player. When you hear these accolades from 2-3 people around the table, then—and only then—does that person’s name gets put on “the list” of people who need to be promoted.

Or the opposite happens: As soon as a leader begins to describe the person they want to promote, you can see the other leaders recounting things that are different than what they are hearing. What they are thinking is that this description is very different from the one they consistently hear from their teams.

You hear comments like, they never get work done on time, they leave a mess of unfinished work in their path, can’t get along with others, has their own agenda. They might be high performing in their existing work group, but no one is going to take a risk on them. They get put on another list: “developmental needs.”

Bottom line, your peer support gets you promoted. Treat your peers with respect and integrity. They are the No.1 factor in getting to the next level.

First, why do you want/need a raise? Is it “time?” Do you “feel” like you “deserve” it? Those are not great reasons to ask for a raise or promotion. Can you clearly define why you should get promoted or get a raise? If yes, that's good.

DO: Present compelling information and make a clear ask. Set up a meeting with your manager. Be clear and upfront about what you want and be prepared to deliver a list of reasons why.

DON'T: Beat around the bush, hem and haw, or assume if you allude to it your hiring manager will figure it out. They won't. You don't get what you don't ask for.

Second, know what the next level is for you. What kind of raise are you looking for? Know what your ask is, and what your secondary ask will be. If you're looking for a promotion, know ahead of time what that role looks like and the work it entails.

DO: Start preparing early for the role you want to take on. Ideally, you'll show initiative and already have taken on most of the responsibility associated with that elevated role before you go to ask for the promotion.

DON'T: Ask for a checklist of what benchmarks you need to hit in order to be considered for a promotion. Following a checklist to get a promotion makes you a cog in the machine, not a leader. In what areas of your work can you demonstrate you're ready for more responsibility NOW?

From Steve Pritchard, Founder for Cuuver.com.

I always look for positivity in my employees; by this, I mean how they handle stress and manage with others while working under pressure. I think this is particularly important for someone who you are looking to promote; you need to be sure that they’re up to the challenge of a higher position and a more stimulating role.

It’s also important that the employee looking to receive a promotion has proven that they’re already capable of the role their title would insinuate. Often, employees are looking for a promotion to be recognized for the extra effort they go through to complete work tasks that are external to their current role.

I like to be approached about promotions with an email to ask for a one-to-one meeting, where we can discuss their progression and options for a promotion. This shows the employee is willing to discuss and explore different options, while also having a prepared plan-of-action, which helps for me to recognize their work ethic further.