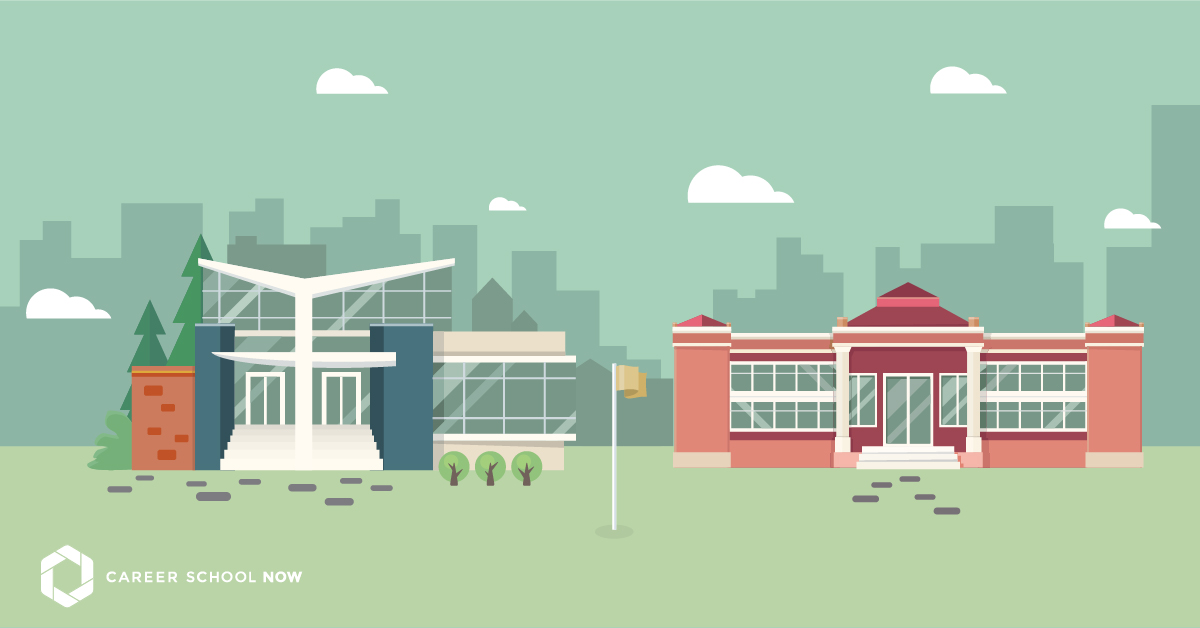 It has been drilled into students' heads for ages—whether from parents, teachers or grandparents—that traditional college is an absolute must. Make the family proud: Go to a four-year university. But, is a bachelor’s degree THAT important? Is it the end-all in education? Sure, everyone needs a skill to support themselves and their families, but do those skills need to come from training at expensive four-year universities? (see: highest paying trade school jobs) Not to mention, not everyone interested in four years of school. There is another option; one that makes so much sense practically and financially—trade schools.


Trade and vocational schools have been underrated and frowned upon for so long. But that undeserved stigma is rapidly changing. More and more students are starting to look for a different path to a career, especially now that the cost of advanced education is leaving people with sticker shock and massive amounts of debt. It’s no secret that those with bachelor’s degrees or higher have larger earning potential than those who stopped at a high school diploma. However, when you weigh in the heavy-duty loan that has to be paid off once a job is secured, the bachelor’s degree doesn’t seem so fancy anymore. It might actually be a burden.

Financial isn’t the only reason to attend a trade school, however. Getting into the workforce quicker (as little as 6 weeks for nursing assistant, medical assistant, and CDL driver) with a qualified, certified skill is probably the top reason to choose trade school over college. So, why else should anyone consider vocational training over traditional college? Read on; we will provide you with the many benefits of attending trade school.

What is Trade School?

Trade school is hands-on, technical education. Because it’s so focused on teaching you a skill, there aren’t any general education courses outside of what pertains to the career, dramatically reducing classroom time. Trade schools have smaller class sizes, averaging around 30 students. Compare that number to universities with classes sometimes reaching 100 students or more, especially when the class takes place in one of those giant lecture halls. Smaller class sizes give you more one-on-one time with the instructor, making it easier to ask questions and receive answers. Plus, you can contribute more in the class when you're up against fewer people. Just these benefits alone have proven to give you a better chance of educational success. And with trade schools having courses from criminal justice and EMT to STEM careers like electrician or computer and information technology, you have lots of choices!

In addition to the faster course completion and scaled-back number of students in each class, benefits of skilled trades schools include flexible learning and real-life applications. There are online programs, plus evening and weekend classes, and you'll come out of trade school with practical, hands-on experience in your chosen profession.

And, don't let anyone fool you: A bachelor's degree is not the only way to a solid income. Vocational school education gets you into many well-paying careers. For example, dental hygienists bring in a median annual salary of $72,910. Electricians earn over $52,000 per year, and HVAC technicians make a median annual wage of $45,910. Those are just the tip of the proverbial iceberg

Vocational education programs have made a real difference in the lives of countless young people nationwide; they build self-confidence and leadership skills by allowing students to utilize their unique gifts and talents. -Conrad Burns

There is coming a massive increase in job availability over the next few years, and less than 1/3rd of these positions will require any type of traditional college degree. Skilled trades such as plumbing, electric, and welding are experiencing shortages of qualified people, creating vacant spots in need of being filled. Healthcare—which 10 out of the 20 of the fastest-growing occupations of 2018 fall under—and technology are also experiencing the same problem: more jobs opening and no one to fill them. The number one trade, however, that is in need of experienced and qualified individuals is in the trucking industry.

Because 1 out of 3 businesses are having a hard time staffing, those coming out of trade schools will find they may have better opportunities—you will have received specialized training for a specific need, plus the necessary certifications to do the job. Your skills are measurable, and employers know you'll fit the hole. However, if more people start to choose trades, there will begin to be some competition for those available jobs.

One massive argument to check off in the pro-column for trade school is the cost. The average cost for a bachelor’s degree is $25,000-$50,000 per year, which adds up to $100,000-$200,000 for those four years of attendance. That price tag doesn’t include room and board or the fact that often a four-year degree can take a bit longer than the estimated four years.

According to Forbes, the college graduate class of 2016 was sent out into the world with not only their degrees but also the largest student loan debt of any graduating class in U.S. history. More than 70 percent were carrying a student loan debt over $37,000. The burden of college costs has shifted from the government over to "we the people," and it’s quite financially devastating. Let’s not even get started on master’s degrees and beyond, because the amount those cost plus the amount of debt students leave with is, well, staggering. And that number will only rise through the years.

There's good news: Trade school runs, on average, around $33,000 from start to finish, with many students only carrying a loan of around $10,000. That doesn’t seem so massive, in comparison to the loans needing to be paid back by those with bachelor’s degrees. This huge monetary savings makes trade school look really attractive.

Not to mention, having a bachelor's degree doesn't even guarantee a high-paying jobs in your field of study. But because there is such a need for those skilled in the trades, vocational school grads are often immediately placed into jobs in their niche upon obtaining their diplomas or certificates, enabling them to start earning a salary right away.

In the past, there hasn’t been much money available to students heading to vocational schools, but things have changed drastically. Professional trade organizations, community colleges, and the state and federal government are now offering money in the form of grants and scholarships for students entering vocational schools. Some states host lottery grants that aren’t based upon on high school grade point averages, and they give a small textbook reimbursement. There are traditional school loans available, as well. Trade school grants are a great option because, as with any other grant, they don’t have to be paid back. Grants are stackable, which means you can combine more than one to lower the cost of trade school. There are so many financing options available for those heading to trade school, making money less of an obstacle for those who desire a career but worry about how they will pay for it.

How Long is Trade School?

As mentioned earlier, one benefit of trade school is the speed to a diploma or degree. Traditional colleges and universities generally take four years to complete, although it can take longer depending on the student’s course load. Sometimes, college can take five to six years to finally earn that bachelor’s degree. This is largely due to the fact that college curriculum includes courses that have virtually nothing to do with the student’s major. If you're looking to enter a specific trade—and quickly—these would be a waste of time and money, both which could be spent not only on program-specific courses, shortening the amount of classroom time, but also on being out in the real world, working and earning a salary.

Cue in trade school. Programs can be completed in six weeks to two years, depending on which trade and whether you attend full or part time. On the table below, we summarize the length of the most common trade school programs:

When it comes to salaries, trade school graduates aren’t making much less than their traditional college counterparts. The median salary of entry-level positions of trade jobs is $35,720. Bachelor’s degree holders, when they begin working, only make around $11,000 more annually than those who received trade school diplomas, and that's assuming they can even find a job in their chosen field. That may seem like a lot, but consider that every month they are paying an average of $200-$350, or around $3,000 annually, on their student loan. That brings the salary down rather quickly. Also, keep in mind that you, coming out of trade school, will be in the workforce an average of two years longer than traditional college students. You'll be bringing home the bacon that much longer. So on average, you'll have made more than $75,000 before the person with the bachelor’s degree even pounds the pavement in search of a job.

Another fact is that more and more job positions are being filled offshore to keep company costs down. However, trade school positions, ones that need a physical body present, are not easily filled by going elsewhere. Trade skill workers such as plumbers, mechanics, and electricians need to be available to work onsite; this type of work can not be done via the Internet. There is a great need for more skilled workers, since the present workforce is beginning to age. Even more jobs will open once the older guys and girls start retiring, calling for the younger set to jump into their shoes and hit the ground running.

You have to learn the rules of the game. And then you have to play better than anyone else.-Albert Einstein

Did you know that 40% of the student body will drop out of a four-year college? FORTY PERCENT. That’s a massive number of students. And, they will still have to pay back the money borrowed. If you're at all unsure about traditional college working for you, whether it's the length or the cost, then don't feel like you have to pick it anyway to get ahead. Choosing to go to trade school over college is a viable option for so many reasons. The cost for trade school is significantly lower than traditional college. The amount of time spent in a classroom is reduced because the courses are subject-specific and relevant to your chosen profession. And salaries for you coming out of trade school are pretty competitive with your bachelor degree-bearing counterparts, especially when you weigh in the fact that most students come out of universities burdened in debt that takes forever to pay back. Added to all the great facts about trade school versus college, most trade schools offer their graduating students job placement assistance, which practically guarantees you'll start to earn immediately upon receiving your certificate or diploma!

Furthering your education is always a fantastic idea, and it’s best to explore your options when it comes to going to a trade school or college. So, from public service careers in criminal justice to jobs with solid growth potential like certified nursing assistant, don't forget to consider trade schools.

Which Trade School Programs Take The Least Time?
Vocational Education: Making Over Another Path To Success
Skilled Trade & Tech Jobs That Pay Over $30/hr
List Of Scholarships For Trade School
My Twentysomething, Crazy Career Path
...Previously Becoming a Surgical Technician: Surgical Tech Career Information Up Next... How to get Financial Aid for Trade School