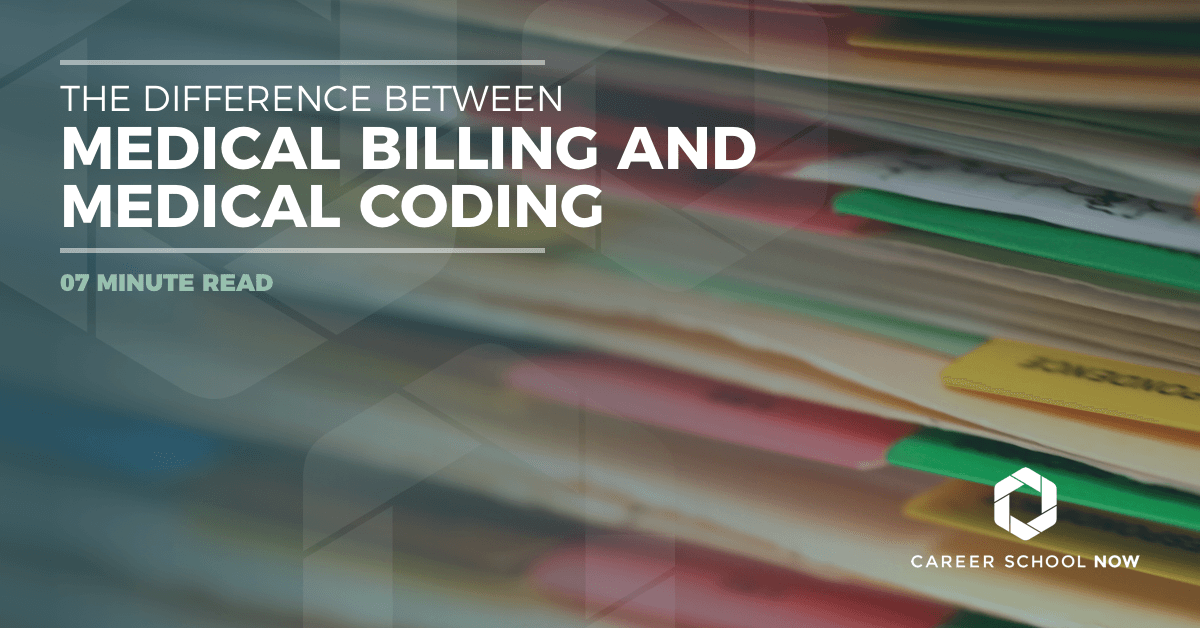 If you’re considering more of an administration-type career within the health field, there are two important paths to think about: medical billing and medical coding. They are completely separate, yet ‘best friends forever’ careers that are often lumped together. Read on to find out more about the differences (and similarities) between medical billing and medical coding jobs.

Contrary to popular belief, medical billing and medical coding are different careers. Two separate, yet perfectly fitting pieces of a puzzle. While they both live in, say, the same apartment, they occupy two different rooms. However, they work together for a common goal, third-party reimbursement, whether it’s the insurance agency or the patient.

Some shared responsibilities of the two positions are: being in contact with the insurance companies in varying capacities as well as with the patient. More typical duties that both medical billers and medical coders are held accountable for is accurately coding claims so that the doctor gets accurate payment while keeping the patient content that they are being charged fairly for the proper diagnosis.

Medical coders are the translators of “doctor speak.” They take what the doctor writes on a patient’s chart and translate it as carefully as possible into the proper insurance coding. This is to make sure the patient gets billed correctly, and the insurance company accurately reimburses the doctor’s office.

Each action, from the moment a patient walks through the doors of a medical facility to the time they check out to leave, has a code. Every step that is taken is transcribed into the medical chart, and it’s up to the coder to accurately represent the activity, such as tests and diagnoses, with the proper code.

A medical biller has three parts to their job: creating claims, transaction reports, and patient billing. A biller worth their salt will be skillful at helping all parties involved navigate the murky waters of laws, regulations, and guidelines.

TYPES OF CODING TO KNOW

There are very in-depth codes that both medical billers and medical coders must know. The CPT and ICD-9 or 10 are the two main components to any medical claim. When the codes are combined, it tells the story of why the patient came in and what procedures were done.

BECOMING A BILLER OR CODER

Certification is not required. However, getting certified is highly regarded and recommended because most healthcare facilities prefer coders and billers to be certified. The prerequisite to getting the right education is a high school diploma or GED. Classroom and online learning are available to earn medical coding or medical billing certification.

Most programs for both coding and billing require courses such as medical terminology, medicine codes, procedure, and supply. Also, an introduction into the medical industry bills and laws such as the HIPAA, Affordable Care Act, Fair Debt Collection Act, and the False Claims Act. When choosing a medical billing or coding program, one of the most important factors is that it’s an accredited school.

QUALITIES FOR THE JOB

Medical billing and medical coding aren’t the most left-brained of jobs. Creativity might come into play when trying to finagle a claim but, other than that, the two jobs are more analytical than anything else. To be a great coder or biller, there are certain qualities that need to be present:

WHICH ONE TO CHOOSE

We get it; it’s a tough decision figuring out which route to take when it comes to selecting a career in medical billing and medical coding. Benefits are abundant in both areas. For many, one of the greatest determining factors is collaborative environment versus independent work. If you thrive and grow working alongside a team, then medical coding is the route for you. If you prefer working independently, having full autonomy, then choose medical billing. Both careers provide a decent wage and fantastic work satisfaction. Whichever route you choose, just be sure to gain the proper education and certifications so you can grow in the field.

The Bureau of Labor Statistics website reports that the median annual wage for medical records and health information careers was $38,040. The top 10% in the field earned $62,840 per year, while those just starting out made over $25,000. Most people in these careers work full time, and some work weekends and evenings.

Between now and 2026, employment for health information technicians such as medical billers and medical coders is expected to grow 13%. This is much higher than the average 4%-7% most other jobs will see. The high growth is due to the fact that, as the population of the U.S ages, more technicians will be needed to maintain their health records. Also, an increase in electronic medical records will create a need for qualified individuals to maintain them.

States with highest level of employment

Industries with highest level of employment

Medical & Healthcare Administration Careers
...Previously Find Out How To Get Into Graphic Design Up Next... Architect Career Training, Job Description and Salary Info