What a Bartender Does 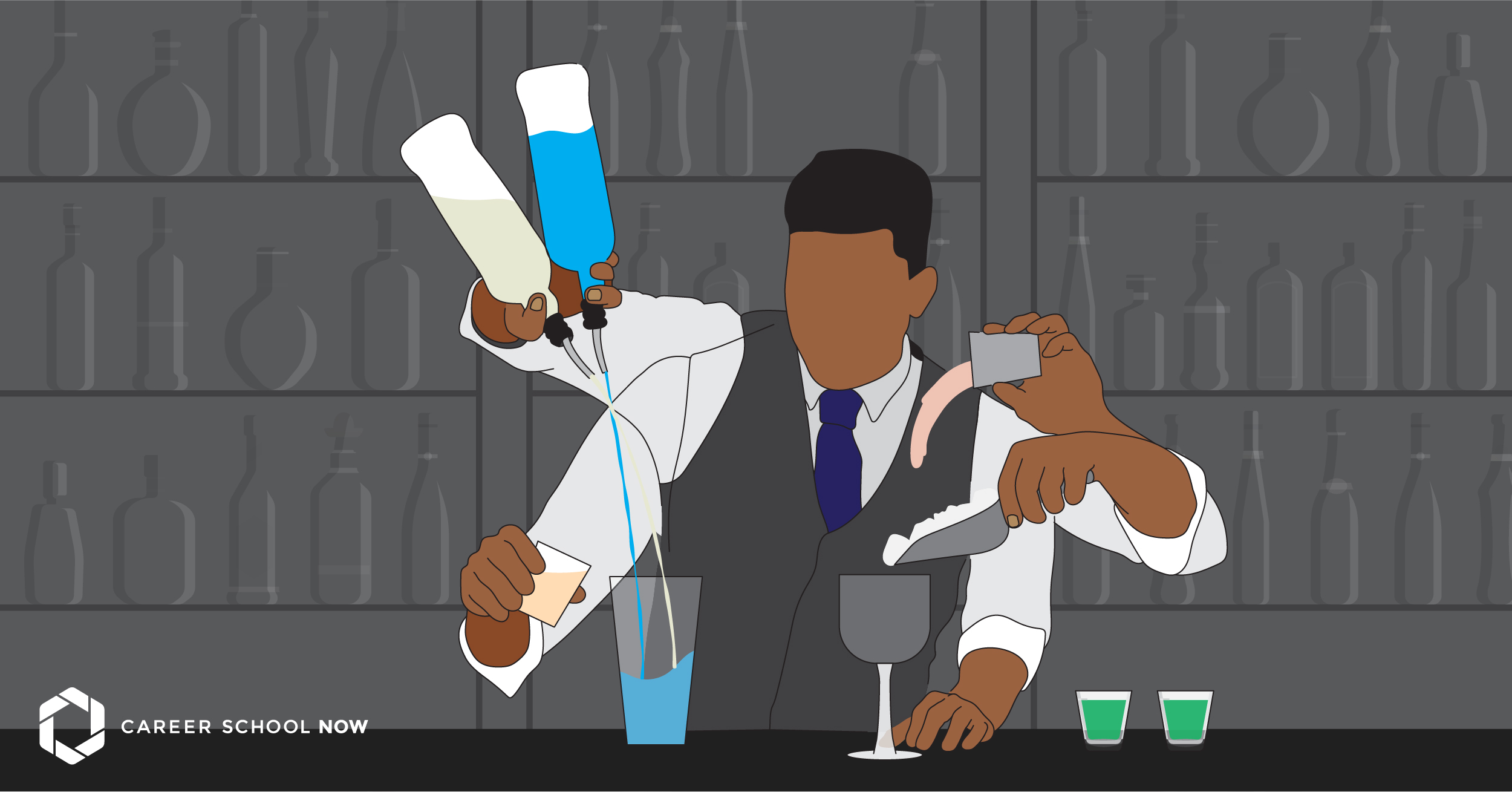 Bartending seems like it would be a super fun, super social job. After all, you’re serving drinks and chatting all night. How bad could that be? The reality is, unlike how the movies portray it, bartending is more than just mixing, shaking, and socializing. Bartending may look like it’s an easy job but don’t let that fool you, there is quite a bit of hard work involved in bartending. For the most part, it’s all work and no play; bartenders get off work too late for the "play" part. Bartending can be a decent paying, rewarding career. Read on about what to expect when thinking about becoming a bartender because the more realistic your expectations are, the more successful you can be.

Bartending may look like a kind of exciting job where you mingle with the people, and you woo all the guys or gals. But, it’s not all fun and games. There is actual work involved, in addition to the socializing and drinking that goes on.

Some quick facts about bartending:

From Barback to Bartender

You can’t just walk into a bar, apply for a bartending job, and expect to get it. Well, maybe YOU can, but it doesn’t hold true for the majority. Legally, you have to be a minimum of 21 years of age to serve alcohol but, in some states, that minimum age may be 18. Many bartenders start out as barbacks, which are the people who help out the bartender by making sure all the drink garnishments are plentiful and, if not, the barback prepares them, restocks the liquor bottles, and replenishes napkins, toothpicks, and other products found in a bar.

While some places may require you to go to bartending school, most bartenders are trained on-the-job. The bartender training may last a few weeks working alongside an already experienced bartender. The bartender-in-training, under the tutelage of the seasoned professional, will learn the finesse of fixing drinks and the know-how of handling humans consuming alcohol. Along with other tricks of the trade.

Some bars will expect their bartenders-in-training to self-study, whether it’s through an online course they recommend, or through books. Your employer will instruct you on what they expect.

When it comes to the need for attending bartending school, the reports are conflicting. Some say that it’s a waste of money because they are expensive and there is no return on the investment, most bartending schools are completely out of touch with what the customers want. Buying books instead of paying for the school is the consensus. You can learn how to mix those new and fancy drinks by studying on your own and your friends most likely won’t mind serving as guinea pigs.

Being a bartender requires absolutely no formal education. However, there are bartending schools out there who will serve up a ton of bartending education in a short amount of time. For the most part, bartenders do not even need a license, let alone a diploma. Although some states do require bartenders to have a license to serve alcohol, that varies as much by the state as it does by a city.

Look for bartending schools that have more than 40 hours of instruction because only 40+ hour courses are accredited, and if you’re going to spend the money, you want the accreditation. Expect the course to run between one to two weeks. ABC Bartending is the largest bartending school in the nation. It offers courses in 30 states and certification in nine. They often have coupons over on Groupon, if that tells you anything. However, their bartending course teaches their students everything from mixing drinks, to making a resume. And, in some of their locations, they offer job placement. When you consider bartending schools, ABC Bartending Schools are the Ivy Leagues.

When it comes to bartending, being qualified outweighs being certified. Meaning, you may have earned a bartending certification but you still are not a people person, and you pour a lousy drink. To be a bartender, qualifications such as an outgoing personality carry a lot more weight.

Bartending school can cost between $30 for online courses to over $400 for on-site instruction.

There isn’t a license or certification that is specific to being a bartender. Do NOT fall for the false claims that you can find online. And, there are quite a few. However, as we mentioned in the previous section, some states and cities may require bartenders to have a license enabling them to serve alcohol, but each area may be different.

If the location you’re working in states you need a license to serve alcohol; you will have to take a short course that lasts anywhere between one to six hours. You’ll learn about the local laws about drink limits for customers, pricing the drinks, and a whole bunch of information you’ll need to know as a bartender. You may also be taught how to recognize fake IDs, how to diffuse potentially violent situations, and the signs to notice if someone had one too many. The whole point of this licensing class is to teach the liquor laws and how to act responsibly as a bartender. Most likely, being hired won’t be weighted on whether or not you have this license, but you will end up needing to get it once you sign the new hire forms.

Never fear, getting certified does not come with a large price tag. It will cost around $25-$50, depending on where the class is being held. Some places only hold classes once a month. If you are required to get a license in your area, apply as soon as you get that bartending job. That license needs to be in your hard within a particular amount of time from your start date. Also, if the bar you get a job in expects you to serve food, then you may also need a food handler's license. The license only costs around $10 and can be taken online.

How you act behind that bar will determine your success. From the way you carry yourself, to the way you interact with the crowd can pretty much influence the kind of tips you can expect. There are particular ways a new bartender should act that will almost guarantee success.

A mixologist will create craft cocktails, and prepare homemade ingredients for their brainchild. Mixologists know more about cocktails than just the basic ones typically ordered and served at a bar or restaurant. The mixologists mixology skills know no bounds.

However, make no mistake, just because the term mixologist sounds fancier than bartender, in the end, it’s just a name that’s no different than calling a secretary and administrative assistant.

According to the Bureau of Labor Statistics, the demand for bartenders is expected to increase by 32% by 2030, which is significantly faster than the national average.

Job competition is strongest in high-end establishments where the hourly rate and tips are higher than in lower-end bars. Graduating from a bartending school may give you an edge on the competition. Although, some places only care about your speed, accuracy, personality, and how well you mix a good drink.

Like the factors that go into a bartender’s salary, geographical locations and the type of industry where you’ll be potentially working are things to look at when considering a job. Some have better employment and pay opportunities than others. Also, because there is some job turnover every year, there should be plenty of job openings available for bartenders.

Let’s take a look at some graphs to get a better idea of employment in various sectors.

Industries Seeing Growth In Employment For Bartenders in 2021

States With the Highest Level of Employment for Bartenders in 2021

The location is a huge factor in a bartender’s salary. If you are working in a bar that is notoriously slow, then you may not earn quite as much as a bartender working in a swanky nightclub or high-end restaurant. However, bartenders can earn a great living.

A bartender's salary is a combination of an hourly wage plus tips. tips can end up tipping your pay into a higher tax bracket. According to the Bureau of Labor Statistics, bartenders in 2021 averaged 30,340, with the highest 10 percent earning closer to $47,710.

A tip for bartenders is to save money where you can because you just never truly know exactly how much money you’re going to make. Of course, money management is important no matter what your career path is. Bartending can be a fun, exciting, and a rewarding career path to take - especially if you're a night owl.